Eve (ev). In the Bible, the first woman and the wife of Adam.

It is the sixth day of the month of September as I finalize this journal entry.  I’m sitting overlooking the Hudson River from the New Jersey side.  Hawks and other birds are flying above me. It is a hot day, but I’m sitting under a tree in the shade.  I’ve come here to further my contemplation on and the symbolism of Eve as she has been showing herself to me these past few months.

As we move into the next season and the fall equinox and think about rituals and ceremony, I’d like to introduce the honoring of Eve, our mother, if you believe her to be, but also the bringer of change, newness and intuition.

For those who don’t know me – I’m a very new writer – I shared a post a year ago on the Motherhouse of the Goddess blog about a Goddess I came across while traveling around Japan in the fall and winter of 2012/2013. I was not a follower of Goddesses per se, but I had for some time prior called in soul, my “Inner Goddess.”  Landing in Japan, a country that constantly honors the Gods and Goddess from the Shinto religion, I was jolted into a deeper connection to the world of Gods and Goddesses. It was enlightening!

With my new awareness, upon my return, I sought education on this realm. I explored blogs and books and eventually ended up on The Motherhouse of the Goddess. With one phone call, Kimberly hooked me and here I am. 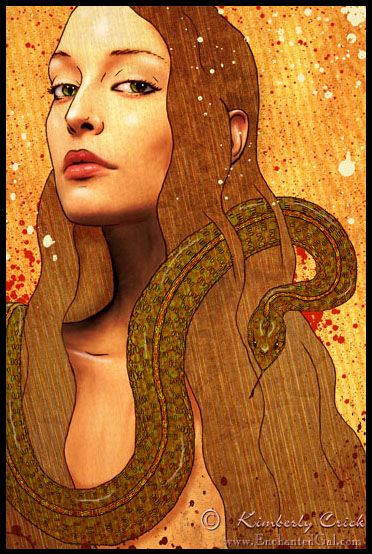 Eve appeared to me earlier this year, 2015. I can’t quite recall when I reached out to Kimberly asking her to share any knowledge she could spare my way, but it started with license plates in my State.  I would drive down streets and suddenly notice “EVE” on a license plate.  At first, it wasn’t every day, or maybe I hadn’t realized it was every day, but then I did start to notice “EVE” on a daily basis. Sometimes that daily basis included multiple sightings. In fact, I’d often notice that I’d be behind a car with “EVE” on the license plate.

While I continue to see “EVE” on license plates, I also started meeting women named Eve, and seeing books titled “Eve” or scrawled on stickers and storefront walls in NYC. It has always left me with the same thought and feeling – “EVE” is speaking to you; she is your Goddess of the moment and you must listen to her and her message.

I started this article, with the two definitions of the word “Eve” as provided by the Webster’s II New Riverside Dictionary (1996).  I did this because while I’m aware of the symbolism of EVE, the Goddess, in Christianity (I don’t think many would consider her a Goddess, especially in Catholicism) – the bringer of life – through her we all came to be – her curiosity is what led us to be expunged from the Garden of Eden, the word “eve” means new beginnings. We call the day before Christmas an eve. We place special emphasis on the new beginning that the eve provides. A wedding eve is special because through the eve, we will be different – on that next day, we will be a joined pairing. Evening is also leading to the next day where there is an unknown, but it is considered a blessing offering new opportunities.

I continuously feel as though I am on the “eve” of something incredible. I’ve been in a stagnant place for a while now and my take is that “Eve” the goddess is offering me the symbolic apple. She is beckoning me to follow her path and blaze the trail of belief. She is simultaneously telling me that on the eve that I bite the apple, change will come. Much needed change will come and I will be all the better.

For some, I may be grasping here, but I don’t think so. See, I believe deep down inside that “EVE” is not just my intuition, but she is talking to my intuition, too. She is asking that I listen to my deep feelings and my soul and push forward with that as my North Star.

I believe that “EVE” is your intuition as well.  She may be speaking to me as of now, but she’ll quiet on once I learn to honor her and care for her and be full with her. Then, maybe, when that happens, she’ll move on to you, but you’ll be aware thanks to this exploration I’m you on.

As part of my fall ceremony and ritual, I’ve decided to honor “EVE” by meditating every time I am made aware of her name. Don’t worry, I am not meditating while driving, but instead when I get to my destination, I take two minutes to slow down and listen to my soul. I am also eating an apple a day.

A few weeks ago, I took my almost two-year old niece to a farm to pick apples. I taught her how to grab on to the apples with her small hands and gently pull them off the tree. She enjoyed herself, as did I. I also brought back quite a bit of apples and while I’ve never that big on apples (I do love apple pies, cider and sauce, though), I find that the biting into an apple, centers me. The crispness of the apple reminds me of my strength. The juice that comes with every bite provides me fluid and sweetness when my mouth often feels dry and my body craves sugar.

We are about to hit the point in our life of seasons where we are asked to slow down, to bear down for the upcoming cold and that really allows us to reach into ourselves and listen to our body’s needs and desires. “EVE” is that force asking us, and now is the perfect time to heed her message. I am taking this Fall Equinox period to deeply feel her vibrations and brace myself for the eve that I’m about to pass through.

For the past six or seven months that I’ve been thinking about “EVE,” I have yet to find any real substantive information on her. We know what the Bible tells us.  There has been some literature about her, but nothing that really explores “EVE” as a Goddess. That’s my goal in my future writings both here and on the Motherhouse of the Goddess blog.  If anyone has news to share, I hope you’ll be encouraged to do so. “EVE” wants this.

**Art is Eve by Kimberly Crick

Sara Stroman has over 10 years of experience in writing, communication, design, and social media. She prefers the titles communicator, writer, stationer, and storyteller. She owns a stationery company, properly named S2 Stationery and Design, which focuses on providing unique, eco-friendly, and love inspired missives for her clients. Her creations can be found on Etsy. She has worked for non-profit organizations (American Institute for Cancer Research and The Kaufman Center), one large global corporation (Mitsubishi Corporation of America), interned at Etsy, and volunteered her services for neighborhood organizations (Long Island City CSA and Team in Training) in New York and Washington, D.C. For three months between 2012 and 2013 she traveled to Japan to study Washi (Japanese paper making).