The meaning of her whole name, Amaterasu-ōmikami, is “the great august kami (god) who shines in the heaven”.  She is the Goddess embodied as the Sun who rules the Universe and a principal deity of Japanese Shinto.  The royal family of Japan is believed to directly descend from this vibrant, life-giving Goddess.  She represents fertility and causes the plants to grow that give life to not only humans but to the gods as well.  As the Guardian of the Japanese people, she is still represented by the emblem of the rising sun on the Japanese Flag.

The stories and myths of Amaterasu come from the Kojiki, the oldest surviving book in Japan that was completed in 712 c.e. and means “Record of Ancient Things”.  Prior to the written form, the Kojiki was transmitted orally and contains myths, legends, songs, genealogies, and statements and historical narratives regarding the Imperial Court of Japan, families and origins.

The primary myth of Amaterasu concerns a ritual contest with her brother, Susanowo, who is known for his disruptive and inappropriate behavior.  He comes to heaven to see Amaterasu and promises that he wishes no harm.  Amaterasu is wary so he proposes a ritual test to prove his good will.  He requests from her five jewels and says that if he is able to birth boys from these jewels, then it would show that his intentions are peaceful.  She agrees and Susanowo cracks open the five jewels to reveal five gods.  Before Amaterasu could buy into the results, Susanowo goes on a wild rampage in excitement about his creation.  He rampages the world, destroying everything in his path.  The final insult occurs when he throws the flayed corpse of a horse through Amaterasu’s heavenly weaving hall roof, causing the death of one of her maiden attendants, Wakahirume who pricked herself and died.

Amaterasu in her upset flees to the Sky-Rock-Cave and shuts herself inside.  The world fell dark, deprived of the light of Amaterasu.  As blackness covered the world, eight million gods and goddesses come to plead with Amaterasu to return.  She refuses and remains locked in the cave.

The Shamaness and Goddess Uzume arrived on the scene and assessed the situation.  Instead of pleasing with Amaterasu, she slips over a washtub, climbs on top and proceeds to dance, sing, and scream bawdy comments.  Uzume’s dance became wild with her stropping her clothes and entertaining the divine audience who began to applaud and respond in delight to the show before them.

Inside the cave, Amaterasu heard the merriment and wondered how they could be having a celebration without her.  Finally, her curiosity overwhelmed her and she opened the cave door a crack and peeked out.  A mirror (the Yata no Kagami) had been installed directly outside the door to Sky-Rock-Cave and when the door was cracked even a bit, the dazzling beauty of Amaterasu was reflected back to her.  She had never seen herself and stood in shock at the brilliant reflection of her own divine beauty.  Quickly, the other gods pulled the door open and fastened it so that Amaterasu was fully exposed and the door could not be closed again.  And so … the sun returned to the earth and life was saved. 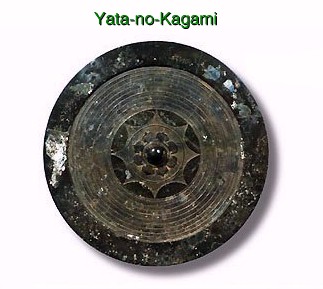 MIRROR: The original mirror that reflected Amaterasu was made by the smith Goddess Ishikore-dome and is kept at the Great Shrine at Ise in the center of Japan and called the Yata no Kagami.  The shrine accepts visitors to present day and you can see the building where the mirror is kept, although the mirror itself has been hidden over 1500 years by a series of offerings of boxes and brocade bags.  It is said that the mirror is eight-sided as eight represents the Shinto number of perfection.  All mirrors are considered sacred to Amaterasu and it is a way to connect with her and reflect the state of the viewer’s soul.  A Japanese proverb says: “When the mirror is dim, the soul is not pure.”

NECKLACE:  As mentioned above, upon her birth, Amaterasu was given the sacred necklace of Izanagi.  The necklace confirms her connection not only to beauty and adornment, but also to weaving and spinning, as round drop-spindles were once used as beads.  A jewel from this necklace is also said to be enshrined at the Great Shrine of Ise.

SOLAR SWORD:  Amaterasu is the Guardian of the Japanese people and in her role of protectress, the solar sword represents her martial attributes.  It is also an indication of her ability to lead her people into war when necessary.

The mirror, necklace and sword are considered the three emblems of the Japanese Imperial Regalia and the three symbols of Shintoism.

KITES:  Kites are the emblem of Amaterasu – pick a sunny day to go fly the kite and attach your prayers to her!

Shinto is the indigenous pre-Buddhist religion of Japan and is still considered a major religion today.  It is worth noting that Japanese Shinto which focuses on the honoring of nature and the concerns of daily life is frequently practiced with Buddhism which focuses on the concerns of the afterlife.  Many Buddhist deities are considered to be Shinto kami – the life forces behind nature that connect one with the divine realm and earthly manifestations.

Amaterasu has many messages for us today, including the power of shining the light of your beauty!

The art above is Amaterasu by Jade Sheldon

Additional Resources to connect with the Goddess Amaterasu:

Resources on Shintoism are plentiful and I included those as well as the Goddess Spirituality aspect of Amaterasu.

Print:  Amaterasu riding the back of the lord of the Underworld

Books that contain chapters on Amaterasu:

The Goddesses’ Mirror by David Kinsley

The Goddess Path by Patricia Monaghan

Goddesses Who Rule edited by Elisabeth Benard and Beverly Moon

If you would like to learn more about Amaterasu and 51 other Goddesses, please join my Self Study course: 52 Goddesses.  Each week you receive a new Goddess with stories of Her Ancient and Living Mythology, a Goddess Practice to connect, and resources to explore further. We also have a private Facebook Community and opportunities for sharing and discussion within The Mystery School of the Goddess.