The image from an ancient Cretan bowl (c.1700 BCE) from the Sacred Center of Phaistos pictured here has often been interpreted as an early depiction of Persephone’s descent or rising. But are clues from later Greek mythology pointing in the right direction in this case?

Recently, my colleague Mika Scott posted the Phaistos bowl image on our Goddess Pilgrimage Facebook site in conjunction with the bee pendant from Mallia. This juxtaposition led me to think again about the importance of bees and pollination in agricultural societies and to offer an alternative reading of the symbolism on the bowl.

In her important work The Language of the Goddess, Marjia Gimbutas taught us to “read” the language of the Goddess in the artifacts of Old Europe through a process of careful comparison of imagery and motifs, making use of what she called the archaeo-mythological method. This method finds that clues in later mythology and folklore can unlock the symbolism of ancient artifacts. Another possibly more important part of the method involves careful attention to plants and animals and their cycles of birth, death, and regeneration, which are portrayed on the artifacts.

The other evening a friend was speaking of a series of images from Kerala, India in which the heads of various animals were placed on human female bodies. In Old Europe the symbolism was different. The images to which my friend referred were completely human below the neck and completely animal above it. In contrast, in Old Europe aspects of human, animal, and plant life were often combined in figures that are neither animal nor human but combine aspects of both.

For example, the seated Goddess from Crete (c.5500 BCE) has snakelike limbs, a beaked face, and lines which may represent rivers and streams, as well as a human form. She is neither woman nor bird nor snake nor river alone but rather symbolizes what Gimbutas calls the unity of life.

According to Gimbutas, the gold seal ring from Isopata, Crete (c.1600-1450 BCE) depicts a spring pollination ritual in which women imitate the dances of bees. The “unhumanllike” shape of the women’s heads is understood as deliberate intention to make the women’s heads look like bee heads. This interpretation explains the presence of flowers in the scene, the “pollen” that flows from the women’s heads, their pollen garlands, and the depiction of their hair as pollen. The small figure in the sky is the epiphany of the Bee Goddess who “appears” in a steam of pollen in the midst of the ritual. 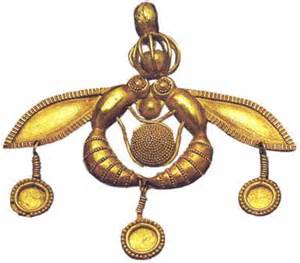 The pendant from Mallia (c.2000 BCE) which depicts two bees depositing a drop of nectar into a honeycomb is another indication of the importance of bee symbolism in ancient Crete.

Here I will interject one of my ah-ha moments.

On a walk, a biologist friend of mine and I came upon a group of bees pollinating flowers. “Oh how I love bees,” my friend crooned, “ all of my research on plant DNA requires bees to pollinate my fields. Without them, I would not be able to do my research.”

Returning to the Phaistos bowl, I note the similarity in shape of the “skirts” of the dancing women to the bodies of the bees portrayed on the Mallia pendant. Could these dancing women like those portrayed on the Isopata ring be involved in a pollination ritual? This would explain the flower at the lower right of the scene. Are the dots on their skirt-bodies pollen?

Could the figure in the center be the queen bee? Is her vulva-like shape symbolic of the fact that she is the one who gives birth to all of the bees in her hive? If all of this is correct, are the round squiggly lines around her body (which have sometimes been interpreted as snakes) a representation of the round openings in the honeycomb where the honey is deposited?

Surely the ancient Cretans knew that the whole of the agricultural cycle depended on the dances of bees.

This would explain why women mimicked the movements of bees in their ritual dances.

*Pictures of the original bowl and an artist’s reconstruction of the image from the Heraklion Musuem, Crete.

Get more information on the Goddess Pilgrimage to Crete in 2015

Carol P. Christ is a founding mother in the study of women and religion, feminist theology, women’s spirituality, and the Goddess movement. She teaches in the Women’s Spirituality program at CIIS and through Ariadne Institute offers life-transforming Goddess Pilgrimages to Crete. Her books include She Who Changes and Rebirth of the Goddess and the widely used anthologies Womanspirit Rising and Weaving the Visions.